Borrego Wash, in the foothills of the Santa Ana Mountains, runs along the western perimeter of the Baker Ranch Residential Development and in its natural condition consisted of a braided stream that meandered across a fairly wide flood plain.  In the 1950s, the wash was funneled into a narrow trapezoidal channel with drop structures and gabions.  After an upstream detention basin in Foothill Ranch failed, severe erosion occurred and as much as 400,000 cubic yards of soil washed out over the following years, depositing in Newport Back Bay.  The streambed scoured into a channel with near vertical side walls up to 35-feet high exposing coarse-grained alluvial fan deposits and sandstone bedrock of the Capistrano Formation with environmentally sensitive native vegetation throughout.  The existing stream banks were unstable and located within a liquefaction seismic hazard zone.  In order to develop the new residential community, drainage improvements included design of approximately 4,000 linear feet of a 12- to 18-foot wide by 10-foot high reinforced concrete box (RCB) to carry the majority of the storm water, while diverting the low flows into the original open drainage course.

Up to 30-foot high embankment slopes were designed over the RCB and were limited in lateral extent due to native vegetation, the blue-line streambed, property line constraints and had to tie-into the natural slopes along the perimeter.  As such, localized fill slopes were designed at 0.25H:1V to 1.5H:1V.  Over-steepened slopes were constructed of soil cement and geogrid-reinforced compacted fill.  Soil cement was created by mixing the native onsite sandy soil with water and approximately 11 percent Portland cement (by weight) with a design minimum compressive strength of 750 pounds per square inch (psi). The design compressive strength was based on several case studies and research related to scour resistant embankments by entities such as the Army Corps of Engineers, the Portland Cement Association, US Department of Transportation, and also other local geotechnical consultants.  Numerous samples of native soil from the site were mixed with varying percentages of Portland cement, molded into test cylinders which were cured, then tested for compressive strength. These results were analyzed to determine the cement content required to achieve the 750psi compressive strength (with a factor of safety of 2 percent).  Laboratory testing of soil-cement mixtures collected in the field during construction showed that actual compressive strengths achieved often exceeded 1,000 psi after 7 to 10 days.

The RCB has been accepted by the Orange County Flood Control District (Facility No. F20) and the low-flow wash is nearing the final phase of vegetation establishment and will likely be turned over to the other regulatory agencies in the near future. 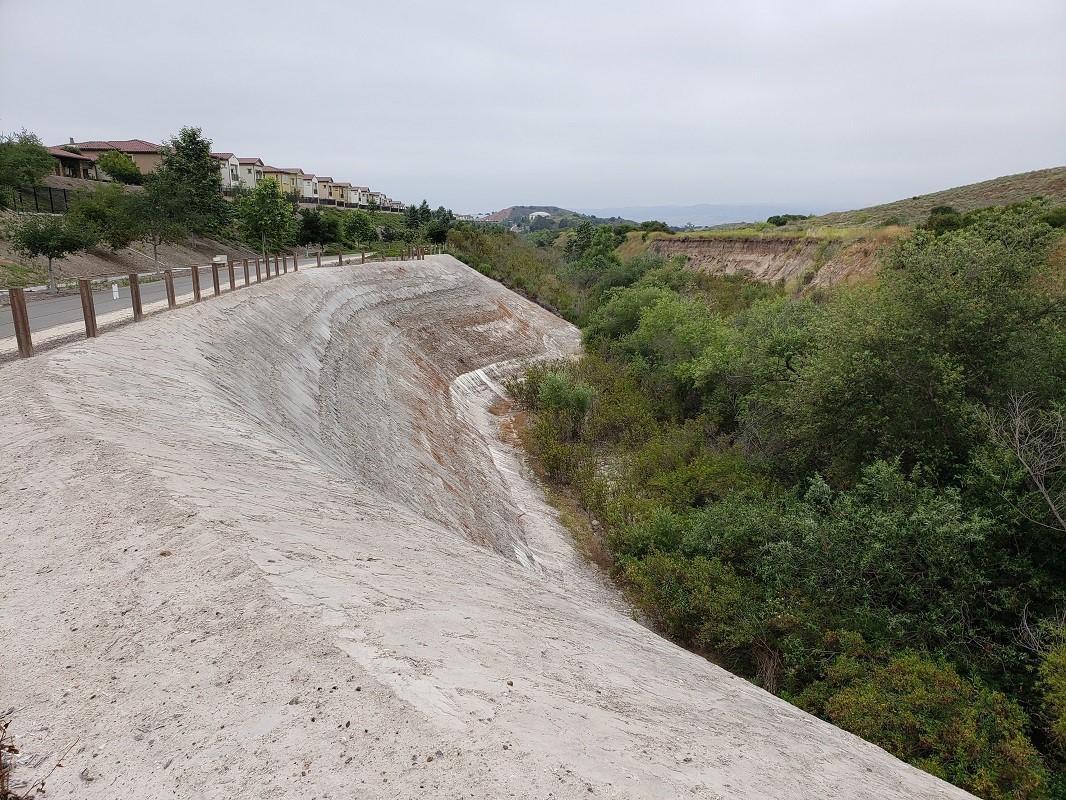