Completed in the September of 2020, SoFi Stadium is the home to two NFL teams, the Los Angeles Rams and the Los Angeles Chargers. The stadium seats 70,000 and can be expanded to 100,000 for special events.  The 3.1 million-square-foot landmark is an architectural and engineering marvel with innovative engineering and construction solutions. This enormous and complex project, was delivered by multiple prime contractors, designers, engineers, surveyors, and approving agencies, established numerous industry firsts.
Located on the former Hollywood Park racetrack, the stadium is just 500 yards from an active seismic fault. The site is on the flight path to LAX Airport three miles away, the playing field was driven 100 feet into the ground. A record-breaking 100 ft tall MSE wall creates a moat around the entire stadium, giving it room to safely move during a seismic event. An advanced structural system featuring buckling restrained braces and lock-up devices provides needed lateral strength. SoFi Stadium’s sinuous semi-transparent roof canopy -supported by the largest double cable-net system in the world - rests on a massive asymmetric steel compression ring that is in turn supported atop a system of (38) 150-ft segmental concrete columns outside of the MSE wall. The canopy includes 46 micro-operable openings to help maintain a comfortable environment for fans as an outdoor experience. The canopy columns are supported on a complex soil-isolated foundation system that extending outwardly from the stadium, in some locations extending under the adjacent public roads.
Considered separate from the stadium yet nestled under a portion of the stadium’s roof canopy, is a 6,000-seat performance venue. Surrounding the stadium, a master-planned community will include 2,500 residential units and 25 acres of public parks, and open space. Parts of the remaining area have been set aside for retail, office and residential components, a 6-acre lake amenity.

SoFi Stadium is the centerpiece of Hollywood Park, a sports and entertainment destination. The team utilized design and construction innovations to realize the vision of developer E. Stanley Kroenke.  The complex transcends NFL football. lt will host a wide range of events, including the Opening and Closing Ceremonies of the 2028 Olympic Games. 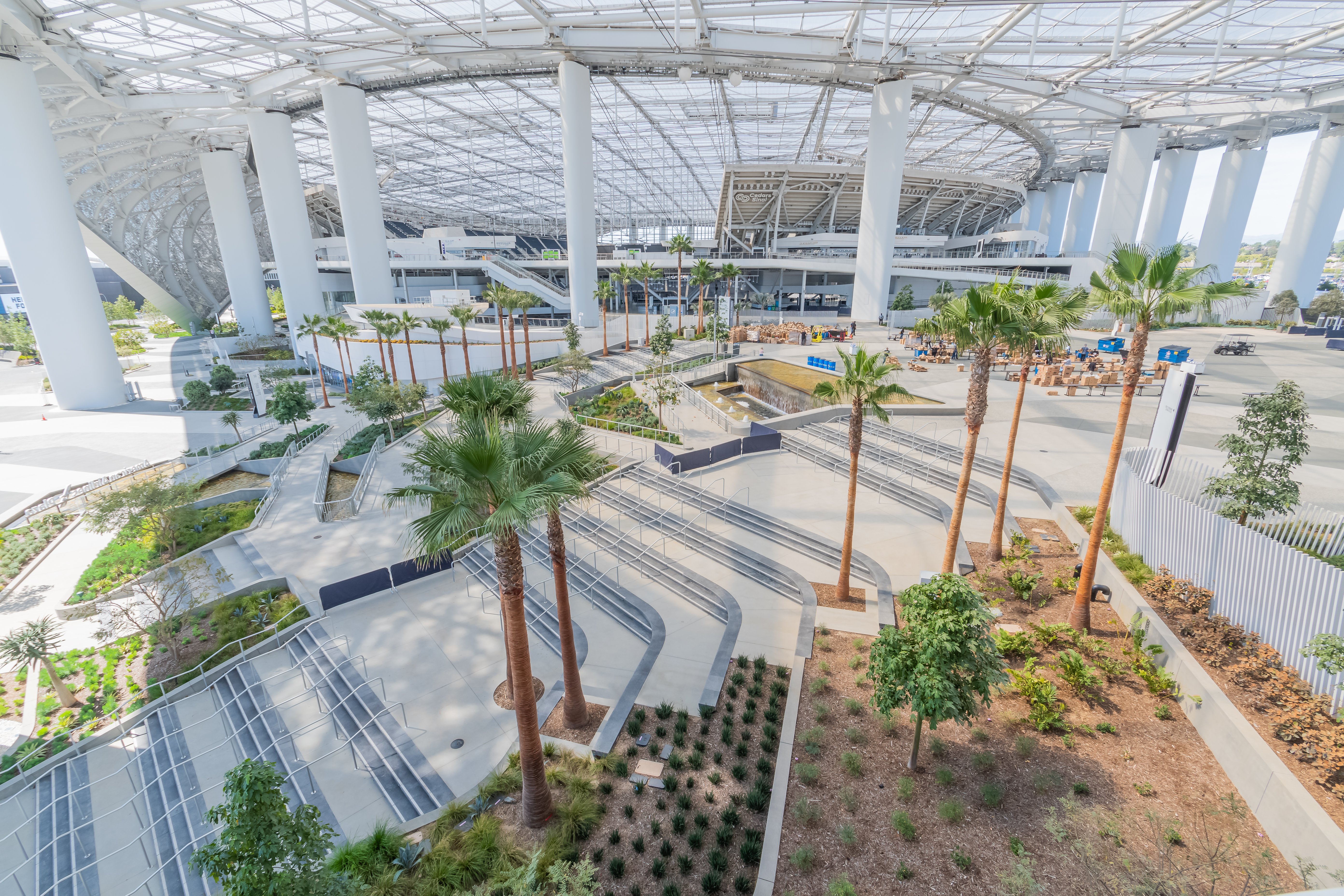